Question: Can a woman eat and drink during labor?

Answer: Yes. In women who are low risk, there is no evidence of harm in eating and drinking during labor.

Evidence: In a Cochrane review, researchers compiled evidence from 5 studies that randomized more than 3100 low-risk women to NPO or eating and drinking during labor. There were no differences between NPO groups and eating/drinking groups with regards to C-sections, instrumental vaginal births, Apgar scores, or any other outcomes assessed. The numbers were insufficient to assess the incidence of Mendelson’s syndrome (aspiration during general anesthesia), an extremely rare outcome that was first reported in the 1940’s. However, since the 1940’s, anesthesia techniques have changed considerably and there is a greater use of regional anesthesia, making occurrence of Mendelson’s syndrome an incredibly rare event. Furthermore, when given freedom to choose whether to eat or drink in labor, many women naturally choose to stop eating the closer they get to delivery. The authors of the review conclude that women should have the right to choose whether or not they would like to eat and drink during labor.(Singata, Tranmer et al. 2010)

So what is the risk of aspiration during general anesthesia for childbirth?In one study, authors examined 4097 maternal deaths that occurred in the U.S. from 1979 to 1990. The risk of aspiration during cesarean childbirth was 0.667 per million women, or approximately 7 events in 10 million births(Hawkins, Koonin et al. 1997). [Side note: The probability of this occurring is less likely than being struck by lightning!] In another study, researchers looked at 11,814 women who were given the freedom to eat and drink during labor, with some women requiring emergency C-sections. There were zero cases of morbidity or mortality reported from aspiration pneumonia, even though 22% of women had eaten solid food (Rooks, Weatherby et al. 1989).

click link to read the entire article and more:  http://evidencebasedbirth.com/q-a-food-and-drink-during-labor-9/ 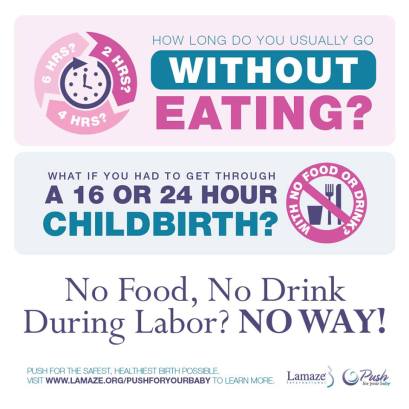 Posted @withregram • @postpartumstress ///Sometimes, the combination of busy or boring days, lack of sleep, tasks and demands that require 24/7 attention or worry, can combine to put you at risk for blowing up at your partner in utter despair. While asking for help is imperative, so is knowing the difference between, "can you come here when you get a second?" and "COME HERE NOW." Discuss this with your partner so you can come up with a code word or phrase that can let each other know that you sense you are reaching a breaking point. Do your best to identify when you feel you are starting to lose patience, or energy, or control. #speakthesecret ❤️ • • Comic from book #goodmomshavescarythoughts @familiustalk @brooklyn_rabbit 👉 • • Available on Amazon and where all books are sold. 😘 #postpartum
Posted @withrepost • @monetnicolebirths 🙏🙏🙏 ”The moment you get your VBAC. The tears. The emotions. And your precious baby just staring up at you...she's been waiting for this too.” #VBAC #monetnicolebirths #birth #birthphotography #hospitalbirth